A Heavy Burden: The Individual Costs of Being Overweight and Obese in the United States (2010) 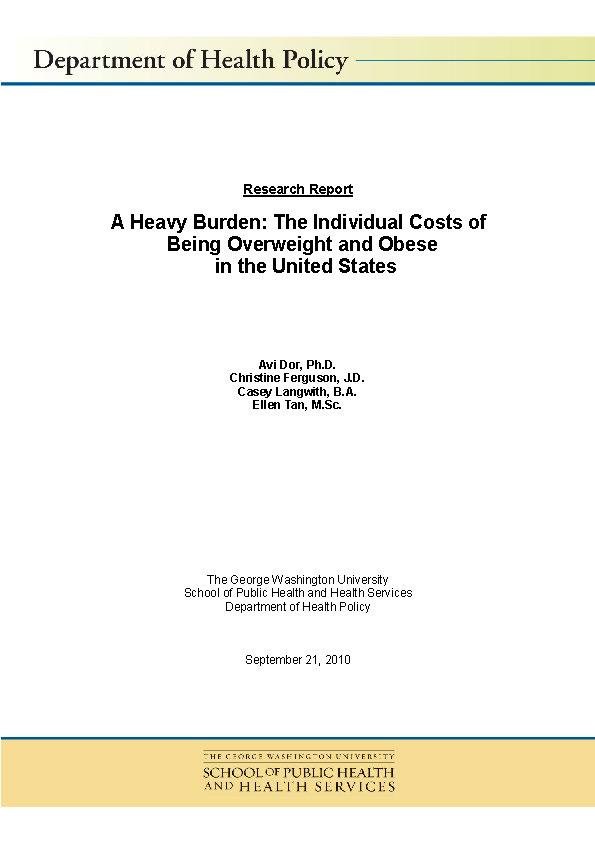 Download: A Heavy Burden: The Individual Costs of Being Overweight and Obese in the United States – PDF

"More than 60% of the United States population is overweight or obese, and if the current trajectory continues, 50% of the population will be obese by 2030. There is no question that being obese or overweight, is more costly than being of normal weight. Using existing literature, we have detailed the costs incurred due to overweight and obesity that affect working-age adults at the individual level.

"In this report, we have provided estimates of annual, incremental costs of overweight and obesity from the individual perspective. However, in addition to the individual, employers, and to some extent, the government, bear some of the costs. Among the items discussed in this review, overweight or obese individuals bear the full burden for some costs, such as the value of lost life, lost wages, gasoline costs, and, when applicable, life insurance. Employers and employees share the burden for many other costs, including direct medical costs, short-term disability, disability pension insurance, absenteeism, and productivity losses. Employers directly pick up the costs for many of these expenditures. However, employees indirectly share part of this burden through lower wages. In addition, through publicly funded programs such as Medicare and Medicaid, the government pays a significant portion of direct medical costs for their beneficiaries.

"What is the cost of being obese in America?

"We only have a partial approximation of the cost of obesity for individuals.

"The picture we have created is only a partial look at the individual costs related to obesity. Existing literature provides information on health- and work-related costs, but with the exception of fuel costs, there is no published academic research that gives us insight into consumer-related costs, such as clothing, air travel, automobile size or furniture. Anecdotal evidence suggests these costs could be significant.

"How obese you are matters.

"The cost drivers are different for the overweight and the obese.

Download the PDF to read the full report – A Heavy Burden: The Individual Costs of Being Overweight and Obese in the United States (2010).