As fiduciaries of both Medicaid and state employee health insurance programs, state governments bear a large portion of the direct and indirect costs of adult obesity. Reducing the burden of diseases associated with obesity is a goal of many state policymakers, but the resources devoted to achieving this goal—such as comprehensive coverage for evidence-based obesity treatments—are highly variable across jurisdictions and often inadequate. STOP’s recent analysis, “Changes in Coverage for Obesity Prevention and Treatment Services: Analysis of Medicaid and State Employee Health Insurance Programs,” provides insight on the current obesity care landscape and how indicated coverage for evidence-based treatments changed between 2009 and 2017. 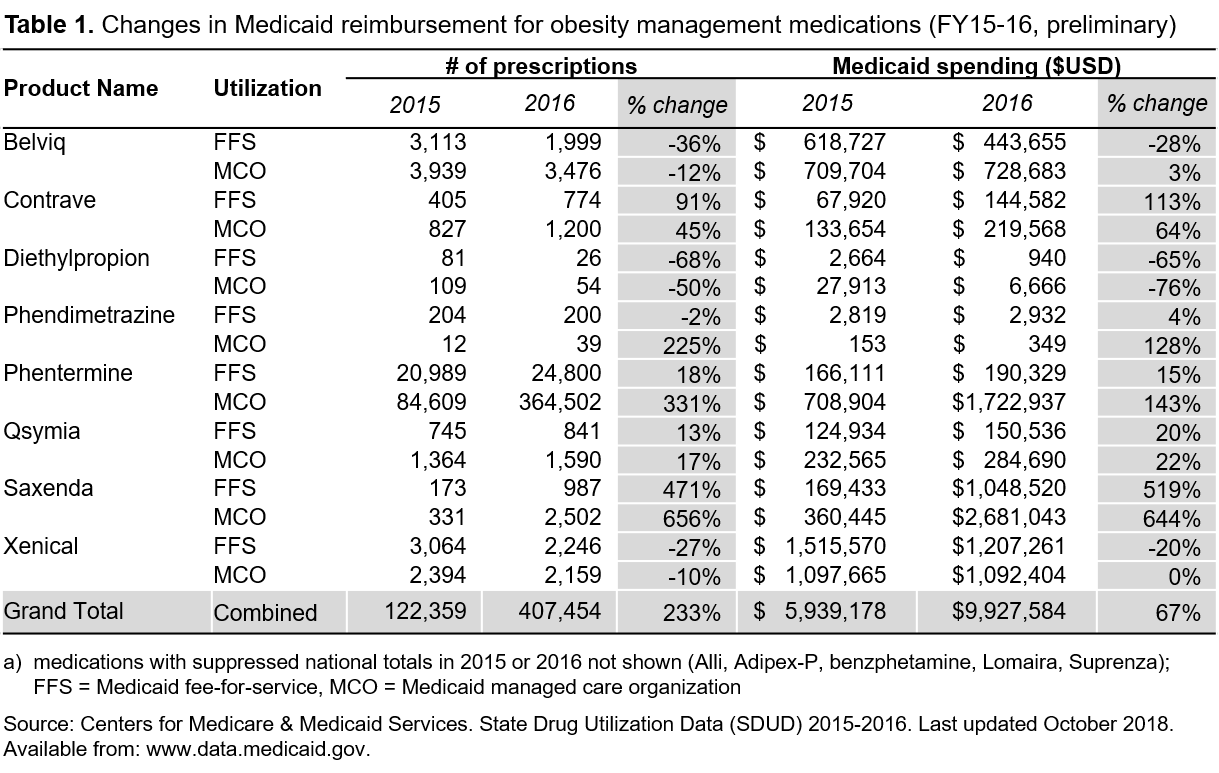 Many plans indicated coverage for the two ends of the spectrum—nutritional counseling and bariatric surgery—with scant coverage for medication therapy. Approved medications were often the least effective drugs. A preliminary analysis of Medicaid data (Table 1) suggests that the total number of prescriptions for on-label obesity management medications reimbursed by state Medicaid programs more than doubled between 2015 (120,000) and 2016 (400,000+). However, this uptick was driven largely by increased utilization of phentermine—a low-cost agent that accounted for 86% of all scripts in 2015 and 96% in 2016. One of the challenges for states is that the higher-cost medications approved for long-term use (e.g. liraglutide, lorcaserin, naltrexone-bupropion, orlistat, phentermine-topiramate) are more effective. A sound cost-benefit analysis that compares costs to outcomes might help increase or further deter their use.

The heterogeneity of obesity care coverage across state-funded programs is not surprising given the regulatory vacuum in which they operate. Neither Medicaid nor self-funded state employee health plans are required to comply with state-mandated health insurance benefit laws intended to ensure uniform coverage for certain obesity treatment services (e.g. nutritional counseling, bariatric surgery) and provider types (e.g. registered dietitians, social workers). Medicaid programs in non-expansion states and state employee plans with “grandfathered” status are also exempt from the Affordable Care Act’s preventive care coverage mandate that requires plans to cover obesity screening and counseling without cost-sharing. Importantly, coverage for obesity treatment services, including intensive behavioral therapy for obesity, was restricted or excluded in several states where the prevalence of adult obesity exceeded 35%in 2017. Lack of regulation may be one reason that the extent of obesity care coverage in Medicaid and state employee health insurance programs is not well-aligned with the estimated prevalence of obesity.

Still, it is incumbent upon states to adopt policies that improve health outcomes and lower healthcare costs among their residents. At a minimum, we recommend that Medicaid and state employee health insurance plans:

Nonetheless, until an ideal benefits package is developed, we will likely continue to see a diversity of offered benefits and a lack of alignment of benefits with need.

To enable easy state-to-state comparisons, we developed an interactive map. The microsite also includes printable state fact sheets with coverage specifics for 2016/2017 Medicaid and state employeehealth plans. Our hope is that states will compare their coverage benefits with their prevalence of obesity, and also compare the benefits they offer with those of their neighboring states.  In addition to an ideal benefit package, an analysis of state savings attributable to the benefits offered could spur a greater investment in obesity care.

AI/ANs: Obesity, Food Systems, and the Pursuit of Health Equity

AI/ANs: Obesity, Food Systems, and the Pursuit of Health Equity